Above: Hooded participants listen to Addison. Taken from Periscope

It is with mixed feelings that I write this. Indoctrination has come to a close in order for Ascension to begin this weekend.

How can I feel so sad and excited about something simultaneously? Well that’s Tension. The Tension Experience is masterful at flooding it’s participants with emotion and tension.

The Tension Experience in an incredibly interactive ARG created by Darren Lynn Bousman and Clint Sears that began early this year.  Over the past several months it has not only told a story, but created a strong community of participants. The participants communicate online and in real life at events organized by The Tension Experience as well as participant run meet ups. We have been encouraged to choose sides between the OOA (a group that believes in Anoch and ascending) and BOS (OOA detractors).

The story is quite complex but I will do my best to summarize it and explain how the live event on September 7th wrapped up Indoctrination.

A young actress named Addison came to Los Angeles and got drawn into the OOA which has been called a cult by some. Her family came looking for her and showed up at a previous event. She stayed in the OOA and even took a position called Gatekeeper. Recently she started referring to herself by her name again instead of her title and seemed to want out of the OOA. The BOS have been trying to save her throughout the journey. They met a member called Sentinal prior to the last event.

On Tuesday many of the participants that have been active in the community (myself included) were invited by Addison to a “meeting” in downtown Los Angeles. We arrived, signed in and had a hood placed over our heads to be lead into another room and stood in a circle listening to Addison speak. Several participants were recognized for their contributions to the community. All were thanked and then the big reveal…The One. We’d all been anxiously awaiting the reveal of The One for some time. The One is…all of us, the community.

Above: I was able to meet Addison and shake her hand. Taken from Periscope

Then it was party time! Three servers came out carrying trays of finger foods and the music played. Addison walked around shaking hands with participants with a smile on her face and a sadness in her eyes.

Above: Russell giving Addison the stuffed cat. Taken from Periscope

After a few minutes Russell (a participant) approached her and returned her stuffed cat that he had been carrying with him since an earlier event. This caused Addison to have a dramatic breakdown. She began screaming,”This isn’t real!” The servers dropped their trays, threw Addison over one of their shoulders and ran out. Then we were told to leave. 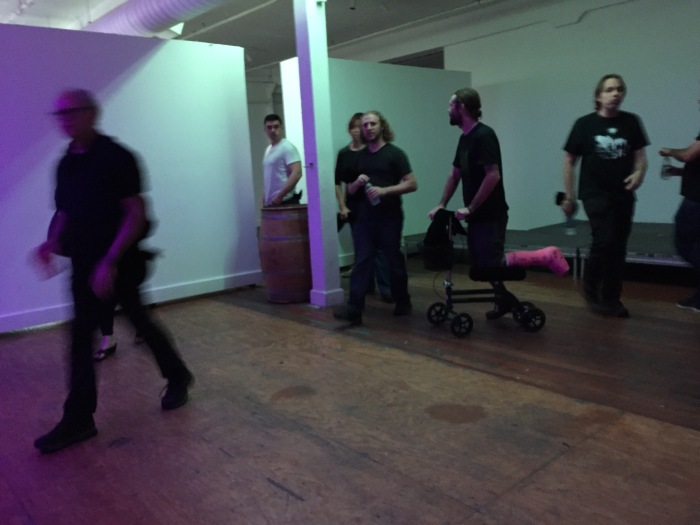 Above: Parricipants leave after Addison is carried away. Servers made a mess dropping trays to grab her.

If you’d like to see videos of the September 7th event you can watch them at The Tension Experience’s Periscope.

Many of the participants, including myself, went out afterward to socialize and discuss Tension. It was a sad time and felt like the end of something wonderful, but also exciting as Ascension begins.

So what is Ascension?

To be honest I’m not 100% sure yet. It is a live event that will be some combination of ARG, Haunt, Escape Room, Interactive theatre and Choose your own adventure maze. They have been clear that you do not have to have any prior knowledge of the Indoctrination story to enjoy Ascension. Honestly I’m not sure what to expect because I’ve avoided reading press about it for fear of spoilers. I do know that I attend tomorrow and I had better use the bathroom before I get there because it’s a long experience.

Hopefully I survive and will post about it soon.

You can get your tickets at The Tension Experience website to join in the excitement.