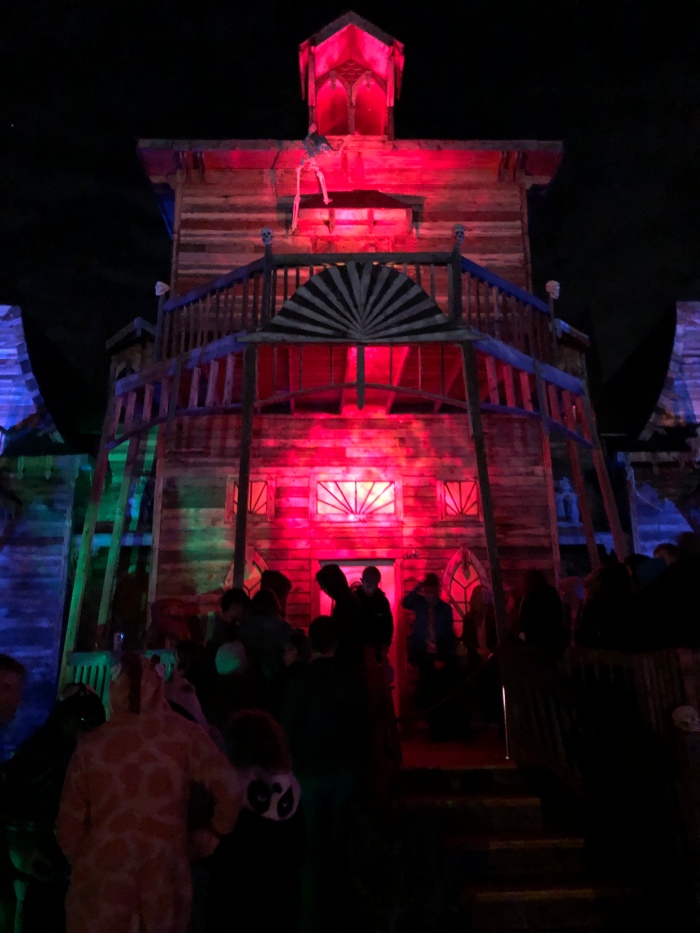 Rotten Manor had incredible potential, but was one of the experiences I’ve had at a haunted attraction.

There were a few great actors, beautiful sets and some cool moments. The actress in the gingerbread house and the actor with the pig mask that did the countdown were awesome! The gingerbread house scene was actually my favorite moment in the entire event. The set, scents, props, lighting and actress were all top notch. The payoff of the oven was lacking though…we expected something, anything in that moment but nothing happened. The foam rooms were creative, but there could’ve been fewer. The dark tunnels and tight spaces moments were great the first few times but did get a bit overused. The facades were gorgeous!!! We did meet a few very competent and kind staff members that seemed passionate about the haunt and customer service.

However, Rotten Manor had some of the worst crowd control I’ve ever seen at a haunted attraction. I’ve seen crowds with similar energy at haunts like Haunted Hoochie or House of Shock except at those events the cast and crew are able to keep the crowd in check. Unfortunately this staff and cast didn’t have the same expertise.

A few moments really stood out as disappointing. I asked the staff member that let us into the trail what the rules of the haunt were and he replied, “There are no rules” which seemed to be the major issue. We had an actress say ,”sorry I broke character” and then continue to talk about how hot the guys in front of us were instead of scaring us. The guys in front of us on the trail managed to hide away in the crypt and proceed to jump out and attempt to scare my husband and I but no one stopped them even though we waited and tried to stay far behind them we’d catch up to them harassing actors or making what appeared to be tiktok videos on different sets (with actors watching them do it). One of the actors just blew directly in my face as a “scare”, which isn’t scary but probably going to lead to me catching a cold. Inside the manor an actor separated my husband and I, which we’ve seen done effectively in other haunts, however there was no purpose or payoff we just ended up not being able to enjoy the haunt together. It was so packed we were often standing around waiting to move, I stood trapped in an airbag for a really long time due to lack of purging the line properly. I had strangers grabbing me and running into me through the majority of the dark sections because we were crowded in the space and couldn’t see.

There was a large crowd out, so lines were long. It was mostly frustrating because the people in front of us chained smoked even while standing in front of the NO SMOKING sign. Security appeared to say something to them but instead of putting out their cigarette they passed it around and tried to finish it then lit up again as soon as he walked away. It seemed security didn’t want to eject anyone even if they clearly were breaking the rules.

Overall the haunt has massive potential, but lacks tremendously in skilled actors and an overall effective staff. It seems a bit of training might change this from a hot mess to one of the nation’s top haunts. Unfortunately at the moment they are just a hot mess. 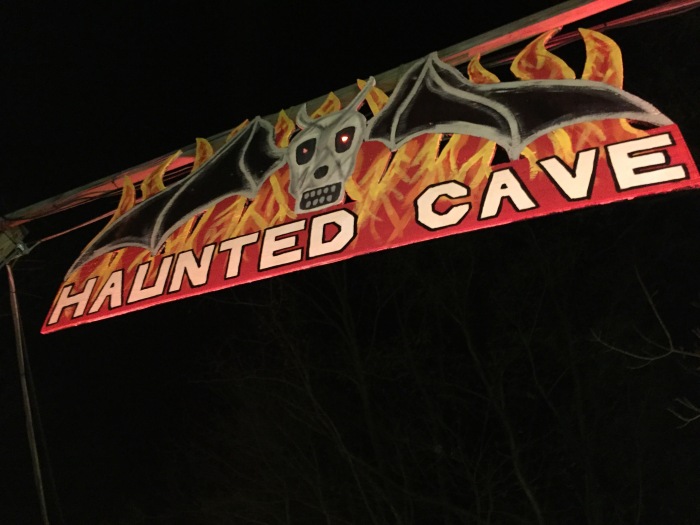 Imagine walking along a bridge over water inside a cave in darkness and feeling something grab your ankle. I don’t have to imagine it, it happened tonight at Lewisburg Haunted Cave. That was the beginning of a very exciting adventure through this one of a kind, truly scary haunted attraction in Lewisburg Ohio.

I have experienced many amazing haunts around the nation from Hollywood style makeup and sets to immersive storytelling to extreme individual experiences, but it’s rare I am actually scared in a haunted attraction. Lewisburg Haunted Cave is genuinely scary and thrilling in a way I’ve rarely experienced. It’s a perfect balance of “fun fear” meets “real fear”. There were moments I legitimately screamed. The unusual underground setting with it’s uneven wet ground, bridges and, claustrophobic nature play a big role. The unexpected moments with perfectly placed pyrotechnics are stunning. The full sized vehicles were impressive. I think the standout scene with Satan giving you actual choices is one of the very special ways this haunted attraction shines above the rest. I mean how unnerving is it to know you have to choose correctly or you could get lost wandering around inside for who knows how long? Honestly though the truck was the moment that made me hit the ground with tears in my eyes. I don’t want to spoil the moment here, but if you’ve been there, then you know the moment I’m talking about. It was such a well done scare that it took a moment for my reality to catch back up to me and remind me that it was a haunted house and I was safe. (They got me good.)

This was about an hour experience because we didn’t get lost. It can take longer. It is dark and the ground is uneven. Please wear sturdy shoes that you won’t care about getting dirty. I wouldn’t recommend this for young children or anyone with health issues that could be aggravated by stress.

It is an impressive combination of genuinely creepy atmosphere, effective actors, awe inspiring animatronics, top notch sound and lighting design, physical and mental stimulation that attacks all of your senses and even pyrotechnics inside one of the most unique venues I’ve encountered. Basically what I’m saying is…it’s amazing!!! Don’t be mislead by the inexpensive ticket price, it’s worth much more for this experience. *They also have a historical tour type hayride that is more family friendly as well as entertinament and concessions. I highly recommend Lewisburg Haunted Cave.

*Due to time constraints we were unable to ride through the family friendly attraction. 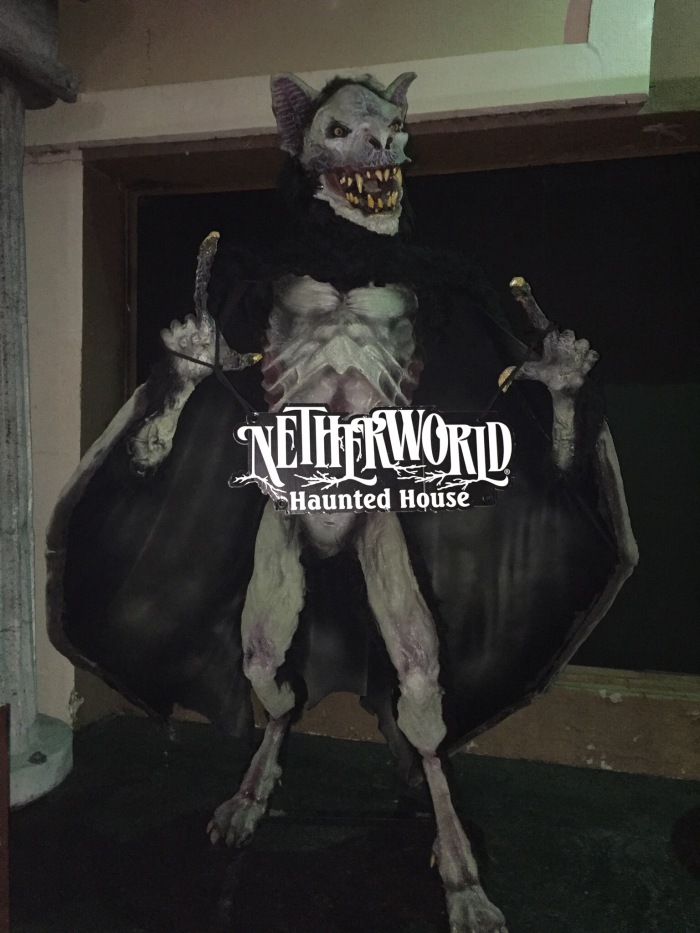 Picture if you will an episode of Hoarders taking place in the warehouse of a Halloween prop and animatronic collector and that’s a good start for imagining Netherworld. It was beyond anything I could’ve expected. This sensory overload walk through haunt had me so stunned by the halfway point that I’m sure my eyes glazed over. I’ve never seen so much stuff in a haunt. It was incredible. I can see why it makes so many “Best Haunt” lists. It’s just incredible. The amount of stuff was so overwhelming that it would be impossible to really see everything in just one pass through. I would expect that even after the 10th or 12th time through, a guest could still find things they’d missed. There are also actors flying around and puppeteers and sound/lighting effects throughout the journey. There’s a room at the end that is full of soap suds called a Foam Room that you can choose to walk through. I did not go through it because as I walked up to the entrance a boy ran out of the entrance into me knocking the wind out of me. I decided that as long as the group of boys was horsing around in it I would pass on the experience. I didn’t actually find the haunt scary thematically and honestly the jump scares were a little far and few in between, but it’s still an impressive haunt worthy of a special trip.

I love going to haunts and Halloween themed events all year, but I go a little crazy during haunt season (late September through early November). Here is a list of the events and haunts I am attending in 2017 in the order I attended them/by state.

Niebolt House (IT experience in Hollywood)

I love going to haunts and Halloween themed events all year, but I go a little crazy during haunt season (late September through early November). Here is a list of the events and haunts I attended in 2016 in no particular order.

The Haunt with no name

Terror Behind These Walls

Below is a list of Halloween events and haunts in the Los Angeles and surrounding areas in no particular order with links to their sites.

The Tension Experience  *** <My Review>

The House on Haunted Hill

The Haunt at Daisy Avenue

The Haunt with No Name

Boo at the Zoo

Rise of the Jack o lanterns

Sleepover at the Natural History Museum