Congratulations to all of these outstanding escape rooms! 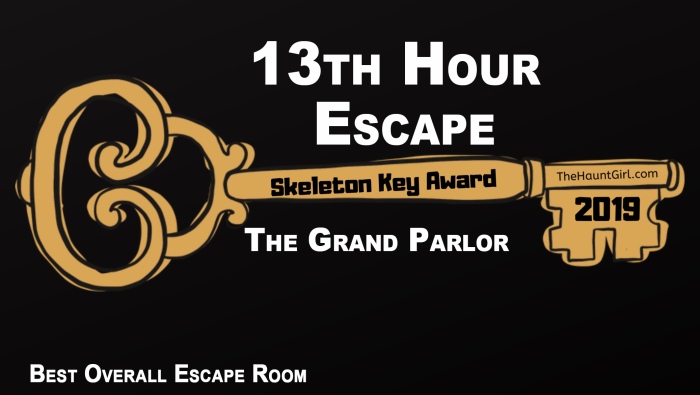 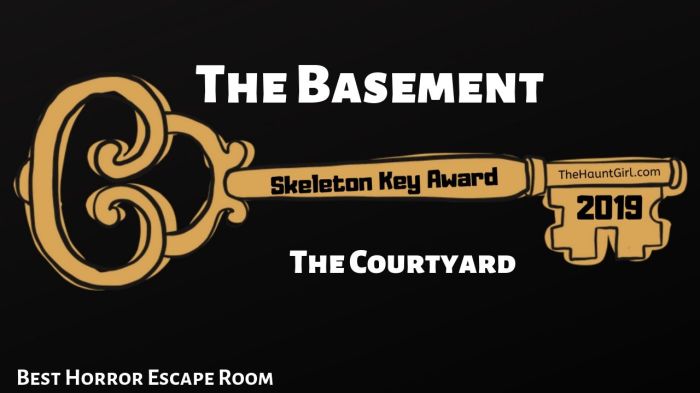 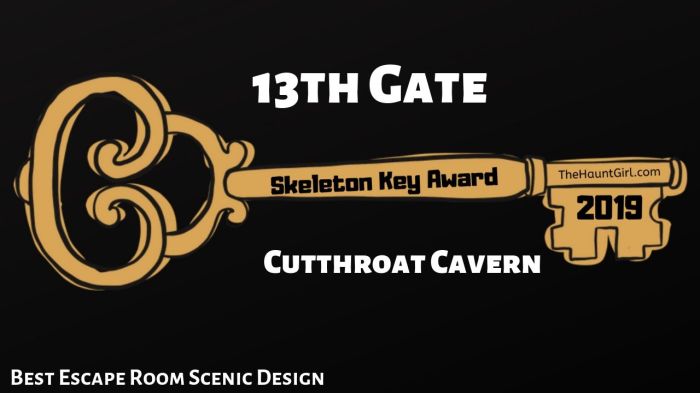 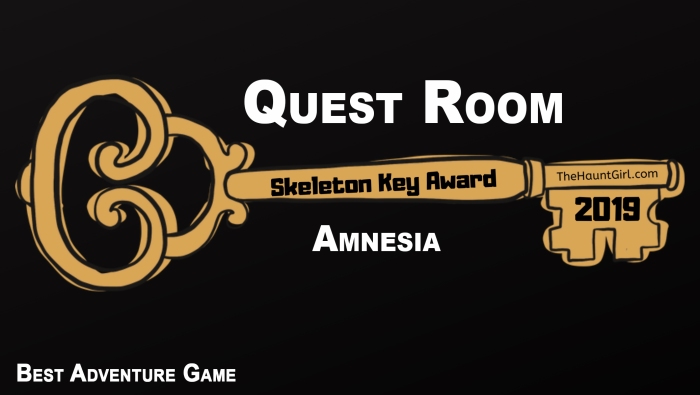 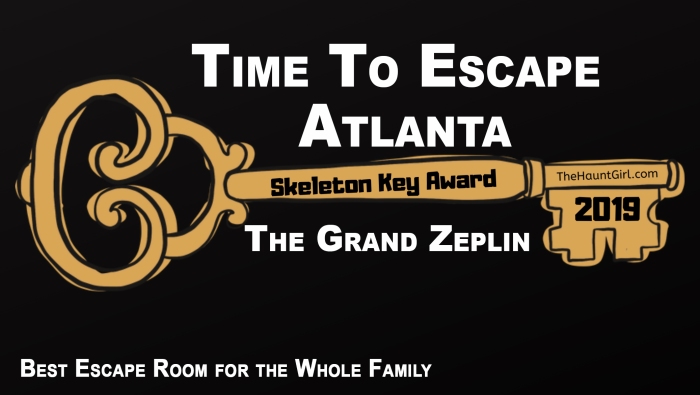 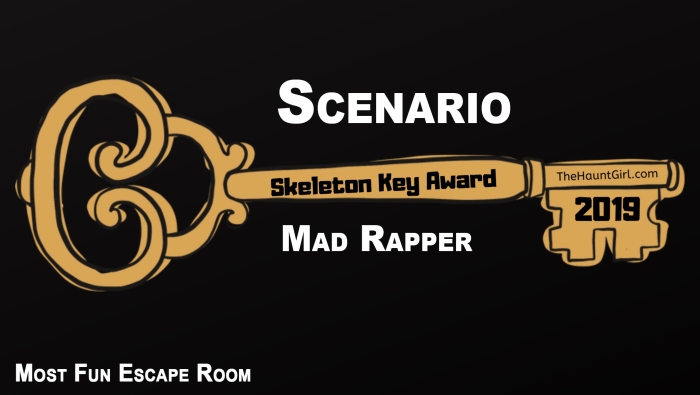 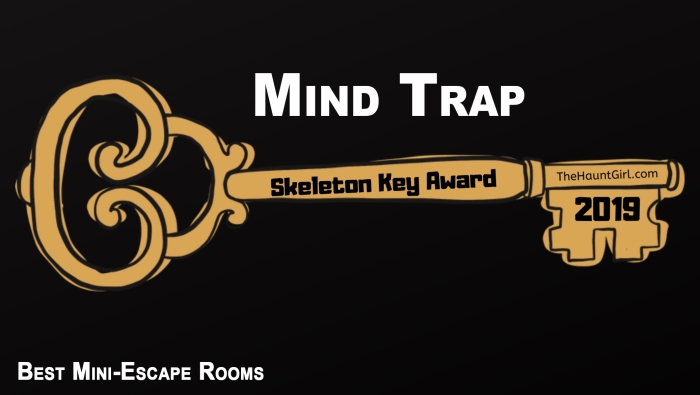 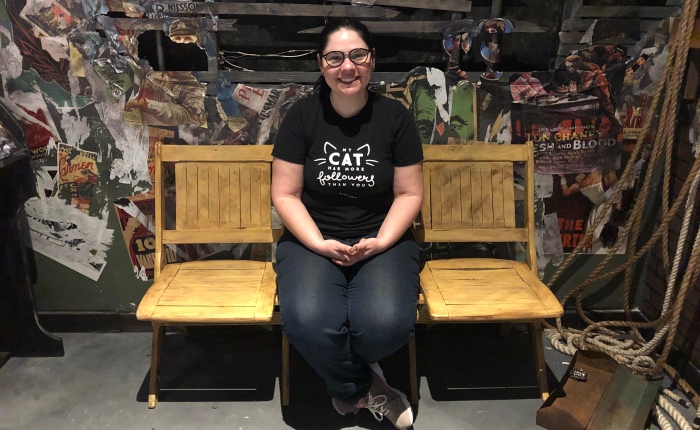 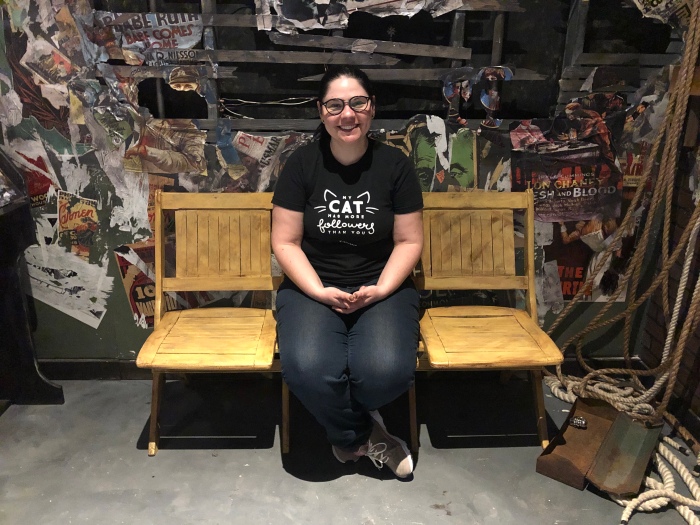 Encore at The Escape Effect is a beautifully designed escape room packed with creative puzzles in a gorgeous setting. As a theatre nerd I got a bit giddy upon entering the game. It actually looks like a backstage area in a theatre. The many many puzzles are cleverly hidden throughout the game. Part of the challenge is to figure out your path along the way. One of my favorite things about this escape room is the lighting design. I’ve never seen anything quite like it in an escape room. I found the game quite challenging to play alone, but incredibly fun. I am also impressed with how they snuck all information needed in the game organically so if you don’t have the prior knowledge, you have guides to teach it to you to solve the puzzles. It is a well done game with a lot of heart. I highly recommend it for anyone that enjoys escape rooms, the theatre, or puzzles.

I LOVED the Abyss at Maze Rooms on Vermont in Los Angeles. Another innovative and unique room from this location. Top notch game. It’s a good date night activity for couples. I loved the immersion. The puzzles were unique and clever. This room had puzzle ideas I have never seen before in over 300 escape rooms. Well done!

Watch the review above from my YouTube channel for more.

I have never been so impressed with storytelling from beginning to end as I was in Sasquatch. This escape game is one of the best examples of storytelling through immersion that I have seen nationwide. I felt a true sense of urgency throughout the game. The effects through use of set design, lighting, sound and other special effects was exactly what you could expect from the company that brings you one of the most impressive haunts in the nation. The puzzles were fairly first generation, but were tied in enough throughout the story that it worked well. The payoff at the end of the game is one of the most impressive things I’ve ever seen in an escape room. Overall I was incredibly impressed with this game. I highly recommend making the trip to play it if you love immersive games.

Ghost themes are always a favorite with me. I thought the story of the captured ghost and paranormal entities was a very fun setting. The room looked great. The props and effects were unique and fun. I adored the hint system in this game. I also loved our amazing gamemaster. The puzzles in this game are designed for a large group in a way that feels a little like busy work. Several of them are tedious physical puzzles. Again they are fairly first generation puzzles, however the props are beyond what I’ve seen in most other escape games. The finale of the game is incredible IF you win. Unfortunately you will not experience it if you lose. Overall this is a fun and unique escape game.

Vampires are another favorite theme of mine, unfortunately I’ve yet to find a vampire themed room that really knocks my socks off. Nosferatu had a clever hint system and fun theme, but the game left a lot to be desired. I should mention that we were partnered up with a rather large group that didn’t really seem to want my husband and I to play (even though they joined our booking knowing we had already signed up). Also the gamemaster for this experience was a bit of a jerk, which also may skew my opinion of the game. We were given envelopes with information about our individual characters, a task and information to memorize. In order for a player to win the group must stab the vampire’s heart and escape PLUS each person must complete their task. It’s a lot of instructions and things to remember for something that doesn’t really add to the game in my personal opinion. It just made the game start off feeling complicated. The room itself wasn’t impressive in set design. There were A LOT of locks and keys in the game. The puzzles were tedious and uninteresting including very time consuming physical puzzles, deciphering and reading. It was definitely not my style of game, even though I was incredibly excited for the theme. My husband and I both accomplished our personal goals, but somehow a decision was made on the final puzzle that did not include us and it was incorrect. If you choose incorrectly at the final puzzle, you lose. The answer is simple if you look at all of the puzzles in the game you will clearly see it. Nothing in the game is too complicated, it’s just all time consuming and there is a lot to do. I imagine this could be a fun game for a large group of beginners, but it was certainly not my kind of game.

Escape the Netherworld is an incredible escape room company with impressive games. They are perfect for large groups of all levels. Experienced players should also enjoy these games whether they have a team of two or group. (I would caution players from doing all three games back to back like we did though. The puzzles started to blend into each other because the puzzle styles are quite similar in all of the games.) My main frustration is that they have created the most outstanding payoffs for winning the games and you only get three hints during gameplay. I strongly feel that the experience of winning these games is as fun as the gameplay and everyone should really be encouraged to complete it within the allotted time. Therefore I wish they allowed for unlimited hints and would try to encourage everyone to get through. I know there will still be people that do not take the hints, but at least they’d have the option. If not then maybe consider making an equally impressive losing payoff.

Unlocked Escape Room is a truly magical experience. It is located in Orange County, California. The story is based around a stage magician, so there are some very unique props and decor in the game. The puzzles are well thought out and the flow is good.

I happen to be partial to the magical theme. I am very impressed with the way the theme integrated the puzzles seamlessly. I am also pleasantly surprised at the amount of magic effects included in the game without giving away too much as far as magicians secrets are concerned. All of the puzzles were logical and challenging enough for both experienced and new players. Some of my favorite puzzles in this game were really simplistic in concept, but still created “aha moments” even for us as experienced players. The game is fairly linear in structure. It’s a lot of fun and I highly recommend it.

There is a minimum of 4 people for gameplay, however they made an exception and allowed my husband and I to play without additional teammates and we were able to escape. We have both played over 200 games, so we had experience on our side.

Overall, this is a wonderfully designed and fun game.

Thank you to Unlocked for hosting us to experience your wonderful escape room game.

Congratulations to all of the 2016 Skeleton Key Award winners!

The following games are all incredibly fun and unique in their own ways. Below you can see them listed by the category in which they shine especially bright. 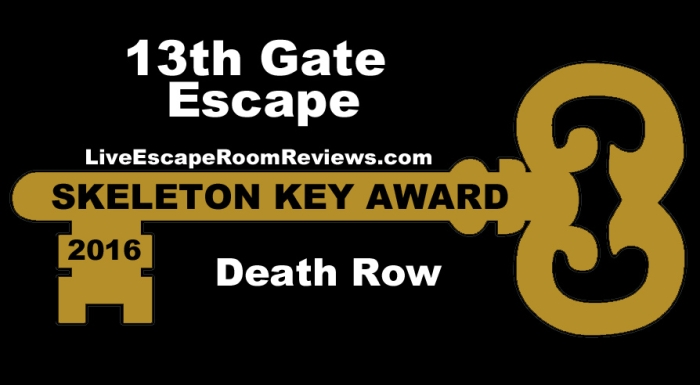 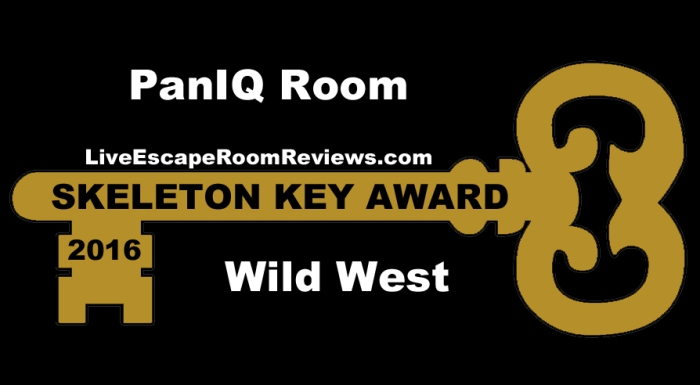 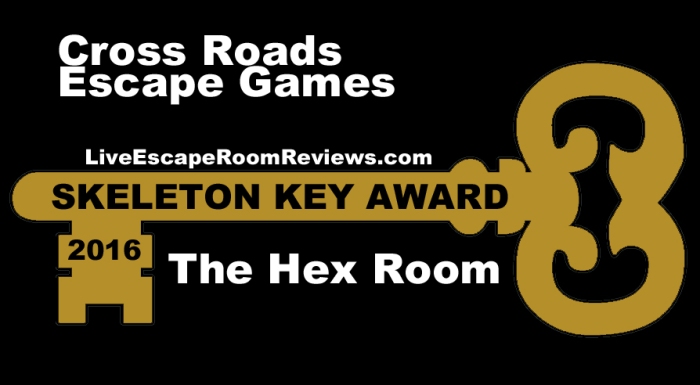 I have never been aboard the Titanic, but I have explored the Queen Mary ship while ghost hunting and let me say that when I entered this Titanic themed escape room I felt like I was actually below deck on a real ship. The set design is incredible. I really did forget that I was in a building in Marina Del Rey during game play because it is so well decorated. The puzzles are integrated into the story seamlessly. This game has very few traditional locks. Instead you are solving puzzles in a way that feels organic to the storytelling. The puzzles are challenging and unique enough for experienced players, but logical in a way new players can still solve and enjoy. I love the creativity they use in creating puzzles that are actual activities you might do on a ship. I also quite enjoy the way they took a common puzzle I have seen a hundred times and recreated it as a large prop that belongs on a ship. Overall the room is well designed, immersive, used creative puzzles to forward the storytelling and has beautiful set decor. It is everything you could ask for in an amazing escape game.

60out is one of the top escape room companies in the nation and they keep expanding, creating new games that are each more impressive than the previous. I highly recommend this and their other escape rooms.

I’ve played A LOT of psycho killer rooms and honestly I thought I was “over” that theme until I played Doctor Psycho. This new room in Los Angeles is a refreshing change from the typical psycho killer escape rooms. It is innovative and fun. There is a great creep factor and comfortableness about it that I haven’t felt in a while. The decor is good. The puzzles are great. Yeah, there are still typical locks and some standard puzzle logic that I’ve seen before, but they also did some new and creative stuff that I just love! (Honestly I’m almost at my 200 room mark, so chances are the puzzles I have seen before will still be fresh and new to most players.) I especially love the way they integrate the players into the story in such an immersive way. Normally when I play a room that just opened I expect a few glitches and growing pains, but this room didn’t have them. I am looking forward to seeing what these guys come up with next.