We came out for Fright Fest from Los Angeles. The six flags magic mountain in CA has an amazing fright fest and so we figured we’d use our pass and do a Halloween vacation hitting up haunts nationwide including both six flags in TX. This park was such a disappointment that we may change our plans for Dallas and skip that six flags. The haunted houses felt like “home haunts” not a professional event.

The School was their best maze. It is in a structure with a theme that is a schoolhouse year round. They had decent costumes. The girl on roller skates was a fun actor.

I liked the Chupacabra scare zone. It had a nice creep factor and the costumes were amazing, although a bit bug-like. The circus/freakshow scarezone was also very well done. It almost felt like a mini maze. Actually all of the scarezones were well done, it was just the mazes that failed.

The one thing that stood out here from any other theme park haunt was their opening. They had their monsters riding a train around the park so guests could see them and snap photos as the train went by. It wasn’t scary, but it was a great chance to see the costumes and makeup before it got too dark. 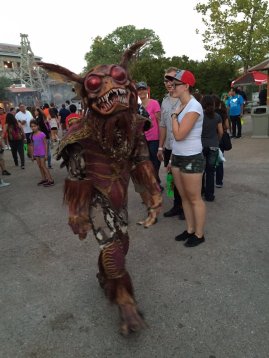